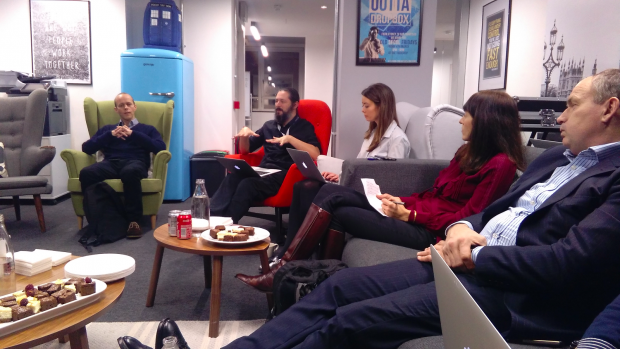 Following on from the success of our sessions with Mastodon C and Facebook last year, we kicked off 2017 with the third in our series of Tech, Digital and Data leaders Seminars. This time we heard from Aditya Agarwal the CTO at Dropbox, a file storage and sharing service, who took part in a “fireside chat” with James Stewart.

As discussed in our recent blog post on Software as a Service (SaaS) we’re keen for government to use more tools that are already available to improve the way we work. This session gave us a greater insight into one of those tools and the current thinking of one provider. It was also a good chance for us to share back some areas where we’d like to see more development.

Interoperability is a term that has a lot of different meanings and we spent some time exploring that. For government interoperability is about removing barriers to entry and reducing lock-in, making sure we’re able to easily use a range of suitable tools. For Dropbox it’s about supporting a wide range of user devices and operating systems, and supporting organic adoption. Both angles can often be dismissed as an idealistic thing. Something which should be aimed for, but in practice is a primary focus for very few companies.

Users often work across a wide variety of platforms so having a tool that transitions seamlessly is ideal. Interoperability also benefits Dropbox by allowing easy, organic growth and allows them to work flexibly across all big tech systems.

MacOS and Windows are the two biggest platforms. Dropbox tests usability of their products across many versions of those two platforms, making sure that both sets of users can understand and easily use the tool. Interestingly, Dropbox found that Mac and Windows users seem to use their devices in very different ways. For example, Dropbox users can simply click and drag a file into their Dropbox to automatically upload it. Mac users tend to be more adept at using that feature than Windows users.

So how do concerns around interoperability affect designing new features? Aditya explained that 60-70% of the time features do work well across multiple platforms. Other times a few minor alterations can rectify any problems.

However there have been some rare occasions where a feature works amazingly well on one platform but just can’t translate across. In those cases the new features have been abandoned.

The group questioned how simple it is to turn off a feature if one user group aren’t using it. It can be painful to turn off a feature on just one version. Aditya pointed out that Dropbox are keen to provide a consistent service to their customers. A Mac user today may be a Windows user next year, or use different platforms at home to in the office. This means it’s very rare for features to differ.

Several years ago internet use started to move towards the use of tablets and smartphones rather than computers. Some companies predicted we’d eventually become ‘mobile only’ and made the decision to focus purely on that market. After a while tech firms realised that wasn’t universally the case.

People are using different devices for different types of activities and for Dropbox mobile use was just a subset of what people do with their primary device. There is still a big market for computers, particularly for work - sending a couple of emails from a mobile is fine, but Dropbox’s observation is that few people would chose to carry out detailed content work from a mobile device.

There needs to be a balance between the two to ensure that functionality isn’t lost when switching between mobile and desktop.

For government, security is always at the forefront of our thinking and concerns about controlling access to sensitive documents can make government departments hesitant to use cloud services.

There’s a cost to that and being overly cautious can prevent productivity.

For both government and organisations like Dropbox an important area of focus will be providing the right interfaces to help users understand the implications of how they use tools (eg. who has access to what files) and providing complete visibility and accountability to IT administrators in ways that help improve security without focussing on prevention.

This is an area where there’s a real need for interoperability - as organisations employ an ever wider range of SaaS tools it’s important that it’s easy for organisations to understand usage without having to build special monitoring for every individual tool.

What does it mean for government?

The session also gave Dropbox the opportunity to learn more about how things work in government.

We also talked about some of our common challenges around when to support old devices and operating systems. When it comes to public services, terminating support for out of date technology is not a simple decision.

The least advantaged people in UK only access government online services by using computer in Job Centres and libraries which can be slow to upgrade. Aditya questioned how we make those decisions and we talked about how mechanisms like spend controls and service assessments give us useful insight, as well as how significant security issues like the POODLE attack on SSLv3 can accelerate change.

For both organisations the increasing use of software that automatically upgrades itself is a very positive move that we hope will make things simpler in future.