We asked Elizabeth Atkin, a civil servant at the Ministry of Justice, to write about her experience at the inaugural Technology Workshop last week.

I joined the civil service just over a year ago, and one of the things watching The Thick of It had not prepared me for was the state of government IT. It is, in fact, beyond parody – which is possibly why Armando Iannucci didn’t bother.

Last week, I went along to a workshop hosted by the Office of the Chief Technology Officer, part of the Government Digital Service. It was set up in response to the response to Sir Bob Kerslake’s blog post on the challenges of technology. Here’s what we discussed on my table: 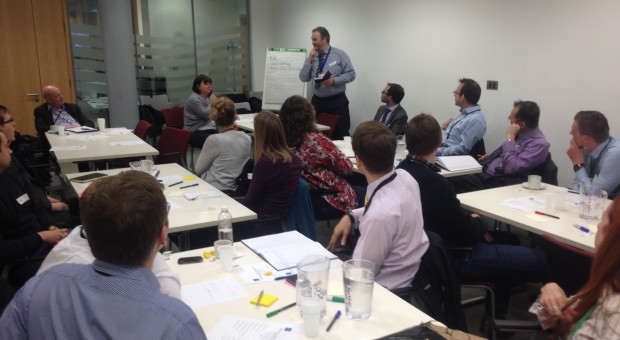 I heard Mike Bracken speak at Sprint Justice a few weeks ago, and have shamelessly copied his format for closing the plenary session with a pat on the back, a challenge and a question.

Pat on the back

Thank you GDS and OCTO for organising this session. I was impressed that you tackled the issues head-on. For such an honest exchange of views on what could have been a pretty depressing subject, I went away feeling surprisingly positive.

There will be post-its, beards, skinny jeans and an almost complete lack of cynicism, but I would challenge you to attend one of these workshops. I can’t believe IT could get any worse, so you’ve got nothing to lose by attending.

I wanted to ask this at the end of the session, but unfortunately we ran out of time. This one’s for Ian Sayer, Chief Technical Officer at MOJ. I read recently about the government’s red lines for IT procurement, and I also read about the contract MOJ has recently signed as part of the ‘Future IT Solutions’ programme. Are the two mutually compatible?

The simple answer to your question is yes.  The Future IT Sourcing ( FITS ) contracts have been let in full consultation and agreement with Cabinet Office, including GDS and CCS.  It is recognised in the Red Lines paper that there could be exceptional circumstances which may result in an IT contract being awarded for over £100m. This was the case with the  FITS Service Integration contract which was awarded to Lockheed Martin in Sept 2013, again in full consultation & approval of our Government colleagues.

FITS will replace all our old IT contracts with six new MoJ-wide contracts for the main things we need to do; service integration and helpdesks, data centres, video and voice networks, local and national data networks, hosting, desktop and mobile devices, and system maintenance.  FITS is one of our most important programmes and we currently estimate that we'll  save over £100m (around 25%)  a  year  and improve  the service. These new arrangements will give us a more modern and robust platform and  give everyone better office applications and the opportunity for more mobile devices .